Searching through websites and I came across this little gem. Someone has written an interesting blog re: Brindley place showing like photos from around the early 1970’s and photos of present day.

As we look down the canal towards the new ‘Barclaycard Arena’. You can still see along the right hand side the canal line which hasn’t changed much and the bridge to the far right of the photo still stands strong. Following development the area was subsequently built on, paths laid and the addition of the connecting bridge sits in the middle of the updated photo linking what is now the ‘ICC Symphony Hall’ and ‘Brindley Place’ in the distance it marks the origin of the Birmingham and Fazeley canal which turns off to the right and down towards the Farmers Bridge Locks. The building in the distance  with the chimney and round window was a ‘Malt House’ and is now a pub called ‘The Malt house’. 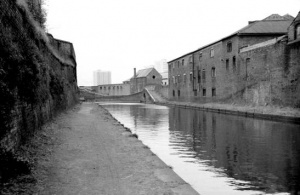 We move further back down the canal only the house survives during development of the area. The buildings and wall where removed and excavated to make way for the ‘ICC symphony Hall’. You can see in the distance of the updated picture how the house was beautifully restored during re-development; This was in its day the Brew-Master’s house. The bridge for which the original photo was taken has also vanished and doesn’t appear in the updated photo. 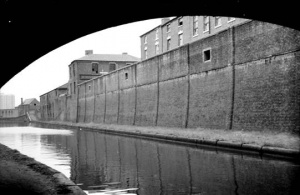 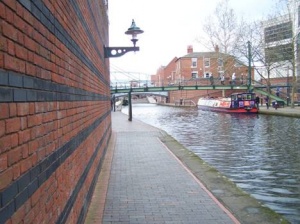 Turning our attention the other way and looking towards what is now known as Broad Street you can see that the bridge was once built on and St Martins place that once ran to the left side of the canal has now been re-developed and forms the rear side to the ‘ICC Symphony Hall’. Looking at the updated photo, The building in the distance now behind Broad street forms part of the frontage side of ‘Canary Wharf’ and houses 3 businesses two bars and an indian restaurant. Formerly in earlier years you can see that there was a building over the canal which was a , recorded on a OS map in 1914 as a ‘Sunday school’. Behind this school, you will see some spires attests, was a Unitarian church; Built in the early 1860’s it still stood some 100 years later before re-development for canary wharf took place. 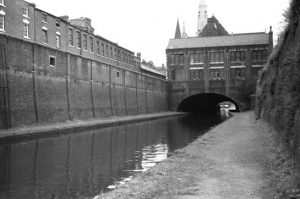 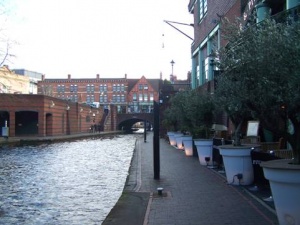 Finally moving to the far side of Brindley place and looking towards the junction of the Birmingham-Worcester canal, where the Malt House pub is, we previously saw. Not alot has changed in some respects except the construction of, the now, Barclaycard Arena in the distance. 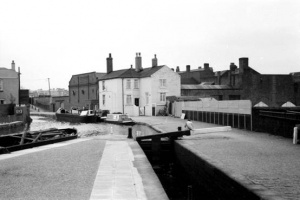 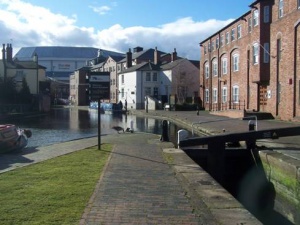