During the 1980’2 development of the ICC symphony Hall developers uncovered a shocking secret that had been kept for many years. Just feet below games of hop scotch, tig and football schoolyard from the Birmingham City centre church building lay a secret tomb holding 1,163 souls. It was a burial ground yards away from what is now the ICC atrium.

The St Peter’s Place site, used as a council car park when the investigation began, was next to land occupied by St Peter’s Church, a building demolished in 1969. Nearly all of those buried were Italians who emigrated to our city. The adults and children were laid to rest in the 18th and 19th century. The shocking discovery sparked fears of a Broad Street plague pit, though a painstaking search of records later revealed Black Death played no part in the mass grave. The skeletons were ‘crated up’ in secrecy – a task that took six weeks – and reinterred at Oscott College Cemetery, Sutton Coldfield. The site today is marked by a simple wooden cross.

It was a very covert operation when the discovery was made and the only ‘leak’ came from satirical magazine Private eye. Mr Henderson, an estates department recorder tasked with chronicling privately-owned buildings prior to the Broad Street redesign, played a leading role in identifying the pit.

The 78-year-old, who retired in the early 90s, said: “My work was semi-covert at the time because there was a group of objectors who wanted to get the scheme kicked out. One shopkeeper nicknamed me The Spy.

“You have to go back in history to go forward and I realised there might be a burial ground in St Peter’s Place, where the children’s playground used to be. I knew if there was a cemetery there, it could cause problems, cost a great deal of money and hold up work.

“The planners got a local historian involved and it was investigated.

“Operating under Home Office regulations meant excavating in seclusion, so only a few officers knew actual details. Eighteen foot fencing was put up because, under those regulations, public decency had to be maintained.”

Each day brought more remains. Each week brought a burial chamber at a deeper level.

Mr Henderson, who lives in Solihull, added: “The fact the remains had to be re-boxed suggests they lacked durable coffins, but many of the deceased were known to be Italians who lived and worked in Birmingham and attended St Peter’s RC Church.

“I wasn’t surprised by the discovery, but the numbers buried in a small space was unusual.

“Some years later, I bumped into someone on Broad Street who looked lost. He said, ‘I’m looking for St Peter’s Place, I have a forebear who was buried there’.

“I thought it was an incredible coincidence that he should ask someone who knew the answer.”

Shoppers and workers were oblivious to the gruesome dig, but Mr Henderson recalled: “Someone blew the gaff, attracting the unwelcome attention of Private Eye magazine. I’ve still got the copy.”

Maggie Wilson, cemetery manager at Oscott College Cemetery, confirmed skeletal remains were brought in many wooden boxes in the mid-80s.

She said: “The area, and it’s quite a large area, is marked by a 20 foot wooden cross.”

Those 1,163 men, women and children buried in Peter’s Place have not been totally forgotten, however.

Somewhere in the Library of Birmingham is a volume detailing their names. 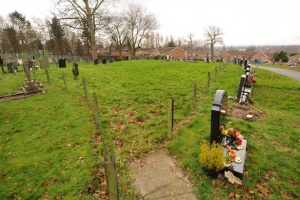