These photo where taken at the Northern end of Sheepcote Street, looking at the Western side of the road, the picture facing South towards Broad Street. The photographer is standing in almost exactly the same place, on top of the canal (it goes under the road) and the area on the
left (out of picture) will become the NIA, ICC, Brindley place etc

The tall building in the distance is on Broad Street. 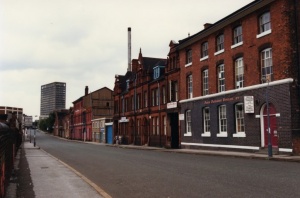 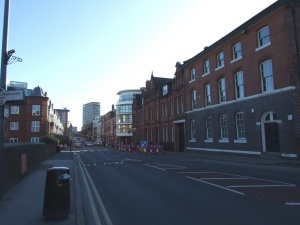 These photos where taken at the Northern end of Sheepcote Street, looking at the Eastern side of the road, the picture facing South towards Broad Street.

The photographer is on the other side of the road from the above pictures. As you can see the area in front of them was developed into flats, and the area behind the flats will become Brindley Place, the ICC etc

The tall buildings in the distance are on Broad Street. 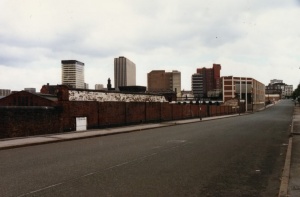 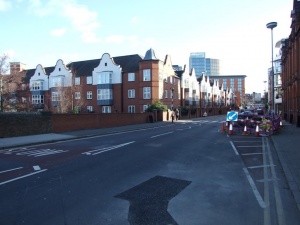 View from half way up Sheepcote Street facing North East 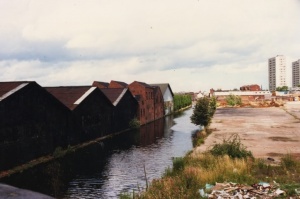 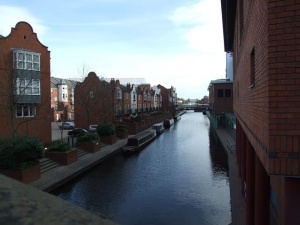 Another view from Sheepcote Street. These pictures where taken in the same place as the above photos, but looking slightly more to the right. It is now looking East, towards what will become Brindley Place.
Work on the ICC (Convention Centre) in the distance is well under way.

If you look clearly in the far distance (on the right) you can see the NatWest symbol on the tower of the building in central Birmingham. 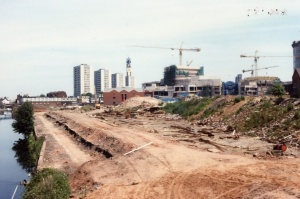 This is another view from Sheepcote Street, taken in the same place as above, but looking even more to the
right. It is now looking South East, towards what will become Brindley Place.
You can see the old Crescent Theatre on the far right (before it was moved), the low building with many windows. Just to the left of it is the old school that became the Ikon Gallery. 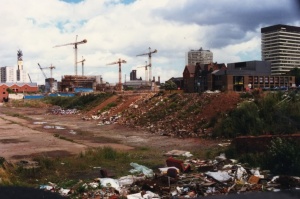 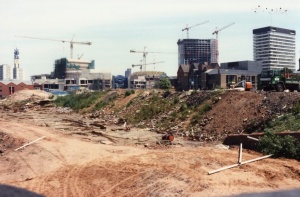 Iv enlarged the picture so lost a bit of quality but the development after completion.

Continue walking up Sheepcote Street, from North to South These pictures where
taken at the Southern end of Sheepcote Street, near Broad Street.
It was near where the above photos where taken; The wall on the left is where the canal goes under
the road, but the photographer is now on the other (Western) side of the street, looking South towards Broad Street.
On the right theres a huge amount of change. You can see the Crescent Theatre on the left, and the City Inn hotel straight in front. Behind these buildings (to the left) is the rest of Brindley Place.

You can see it is the same viewpoint because of the small building on the right, with the windows in the roof and the large
chimney. You can also see the driveway in the bottom right of the picture.
View from Sheepcote Street towards Broad Street. 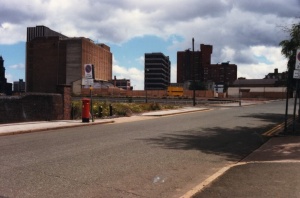 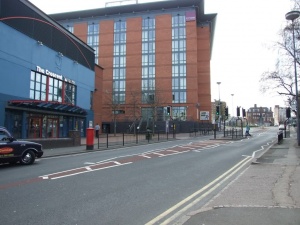 Continue walking up Sheepcote Street, from the North to South.

These pictures where taken at the Southern end of Sheepcote Street, near Broad Street, but now the photographer has turned round from above and I is looking North, AWAY from Broad Street. Where Grosvenor Street meets Sheepcote Street.
On the left, behind the red post box, is a wall, and behind this wall the canal runs under the road. The building with the zig-zag roof runs along the side of the canal.

In the picture on the right its a total change. The view is dominated by the Crescent Theatre in the centre. Behind the theatre is the car park in Brindley Place. The flats on the very left disappear behind the theatre and alongside the canal. 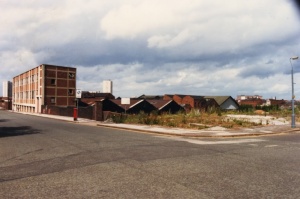 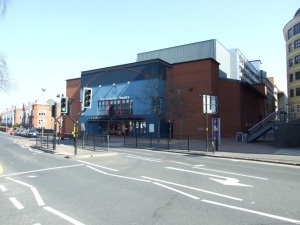 Further up Sheepcote Street, from North to South, these pictures where taken at the Southern end of Sheepcote Street, very near to Broad Street, again looking North (away from Broad Street). Just where Essington
Street meets Sheepcote Street.
The huge blank site in front becomes Brindley Place. A huge amount of change. You can see the City Inn hotel in the foreground, and the Crescent Theatre on the left (mostly hidden by the hotel). Behind these buildings is the rest of Brindley Place.
The zig zag buildings on the left are where the canal runs under the road. 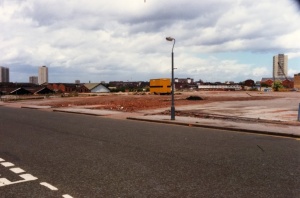 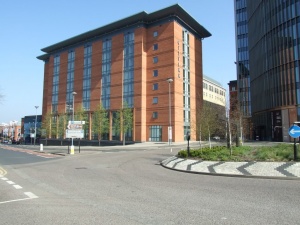 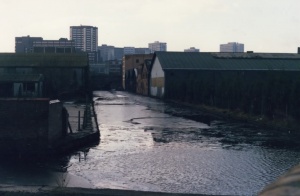 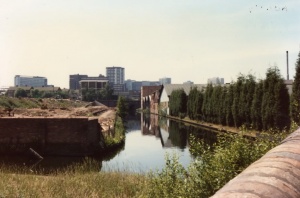 This is a modern picture of the same views as above, facing South West. Brindley Place (and the Sea Life centre) are on the left, modern flats on the right, the NIA on the far right (out of shot). Behind is the Malt House pub and the Convention Centre.
In the distance is the brick bridge over the canal (behind the modern metal bridge), going under Sheepcote Street. You

View from bridge towards Sheepcote Street 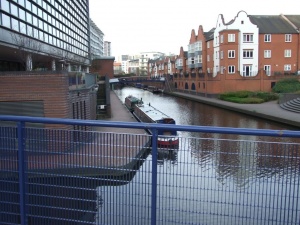