The canal is extremely important in Birmingham’s history – without it, our city would not be anywhere near as important as it is today. Gas Street was the first street in the city have gas lighting, hence the rather unsexy name.

In 1800, Birmingham was the hub of the Industrial Revolution in Britain and the centre of England’s canal network which stretched from Liverpool to London.

There are few raw materials in Birmingham so they were shipped in on the canal and used in factories here. Coal from the Black Country was used in the furnaces of the metal industry. Just above the tunnel, on Broad Street, there was a factory making brass items. The building is still there now – it’s now a pub called The Brasshouse. Gas Street Basin would have been buzzing with constant activity, day and night, as cargoes were loaded and unloaded. 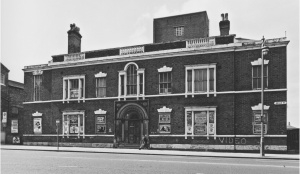 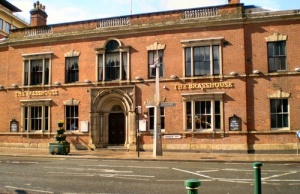 In the 1830s, railways opened and competed for business with the canals. By 1960s, road transport and rail was quicker (and therefore cheaper) than the canals and they stopped being used by businesses. Cadbury’s in Bournville were one of the last local businesses to stop using the canals. Their fleet of boats only stopped transporting their products in the 1960s. The canal area then became run down, the dirty water lined with derelict warehouses.

However, today Birmingham’s canals are buzzing with life again. The historic canals sit comfortably next to Broad Street, one of the city’s busiest entertainment areas. You can take a canal boat tour, have your dinner on a boat or sit outside a pub on the canal side.

Below, before the low black and white footbridge (see photo, right) is the the Canal Information Centre. Next door to the centre is a café, and next door to that, the Tap & Spile pub which used to be a warehouse and then a private cottage. 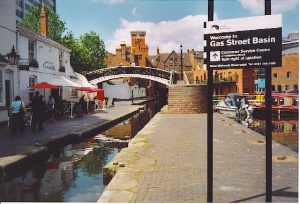 If a cargo needed to continue on the other canal, the whole load had to be taken off one boat and loaded onto another on the other side of the bar which was a major inconvenience. In 1815, a lock was put into the bar to allow boats through.

Today, it’s much easier to pass between canals – there’s a narrow channel under the bridge. Private boats now moor along both sides of the Worcester Bar.

Moving over to the Faxeley junction heres a great shot of it previously on the left and the new development with the sea life centre on the right of the modern photo. 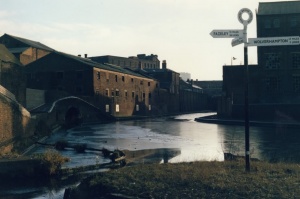 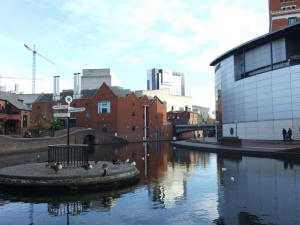 The Birmingham and Fazeley Canal faced serious opposition from the Birmingham Canal Company, but this was eventually overcome, and the route was authorised in 1784. It was designed to provide a much shorter route to London, as all goods from Birmingham to London had previously had to pass down the River Severn before crossing southern England. However, the canal would have been useless unless the Coventry Canal link north of Atherstone was completed, and so the company negotiated with several other canals to ensure that it would be part of a much bigger network once it was completed. This included the Oxford Canal, who agreed to extend their line southwards to reach Oxford and the River Thames, while completion of the Coventry Canal link to Fradley was to be completed in three stages. The Coventry Canal company would build the route to Fazeley, which included the eleven Atherstone locks and two more at Glascote. The Birmingham and Fazeley Canal would build the next section, from Fazeley to Whittington Brook, near Lichfield, some 5.5 miles (8.9 km) to the north, and the Trent and Mersey Canal would complete the route by building southwards from Fradley Junction to meet up at Whittington Brook.